Swatch is always at the forefront of new creative ideas, and following last years first Pop-Up Radio in Swatch’s flagship store along Zurich’s infamous Bahnhofstrasse, this year will see the world premiere of Swatch Faces artist Chiara Luzzana presenting her work “60BPM – The Sound of Swatch”.

Chiara Luzzana, creator of the first official watch sound track of Swatch, will  be hosting her own radio show at the 6th Edition of the International Radio Festival (IRF) in Zurich between 26-30 August, at the IRF radio studio at the FourPoints Hotel Sihlcity. Tune-in, or even better, drop-in, to experience Chiara live in the IRF radio studio. 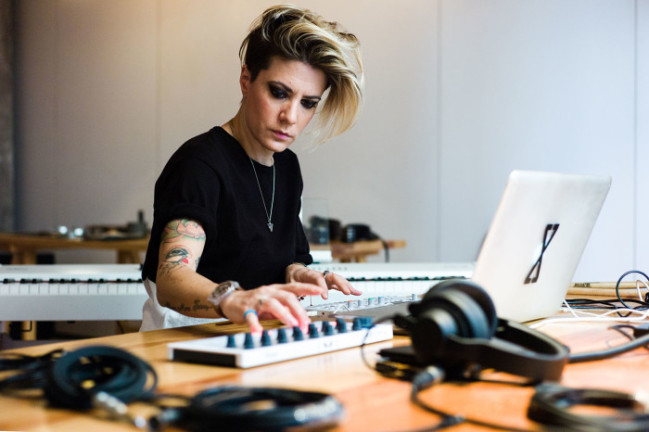 Sound artist Chiara Luzzana unveiled the first watch soundtrack, made with the pure sound of a Swatch watch, at this year’s SWATCH FACES 2015 – PAVILION AT ARSENALE, at la Biennale Arte 2015 in Venice. With the help of special microphones, built by herself, Chiara recorded both the ticking sound, and the sound of every single gear and component present in a Swatch watch. An eclectic artist, Chiara transforms noises and objects into harmony, without any traditional instruments. She is an inventor of unusual musical instruments allowing her to create original compositions and, giving a voice to that which usually doesn’t have one

Chiara’s research for this project began in the Swiss factories of Swatch, where she took all the little objects that made up the watch, from raw materials to the final products, and turned them into musical instruments. The hands of the watch became electric guitars; the worker’s gloves became a harp; and rhythmic and melodic parts were created from her recordings made of factory machines.

“60 Bpm – The sound of Swatch” is the title of the music, composed by Chiara Luzzana, which has become the official soundtrack of Swatch.